I found on this photo on the web its about the authorised shooting of Ducks at El Hondo
We all know it goes on as we hear the shots ringing out around
El Hondo, but on this scale??? 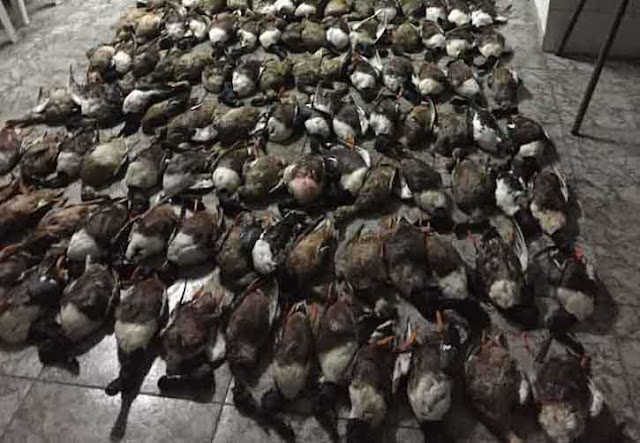 Ducks hunted in El Hondo last February
Below a Google translation
Last April the Association of Friends of the Wetlands of the South of Alicante (AHSA) went to the Territorial Management of Alicante of the Ministry of Environment requesting information on the number and species of aquatic birds authorized to be killed in the preserves of hunting of the Natural Park of the Hondo, during the season 2017-18, as well as the censuses in which they have been based for their elaboration. In addition to the number and result of the inspections carried out by the environmental agents, in the hunting grounds of this natural area, for the control of the runs in the 2017-18 season, in compliance with the provisions of the Master Plan for Use and Management (PRUG).
The Association of Friends of the Wetlands of the South of Alicante (AHSA) recently received a photograph sent by a collaborator of this group in which 6 people appeared posing before more than 250 dead ducks, after a day of hunting. The birds were duck spoons Anas clypeata and common porr Aythia ferina, both species classified as hunting by the current Hunting Law of the Valencian Community and the current Order of Veda. The person who provided the photograph stated that it had been made in a preserve of the El Hondo Natural Park, during the month of February, apparently the environment of the photograph is consistent with the house of one of the hunting grounds of greater surface of this natural park. 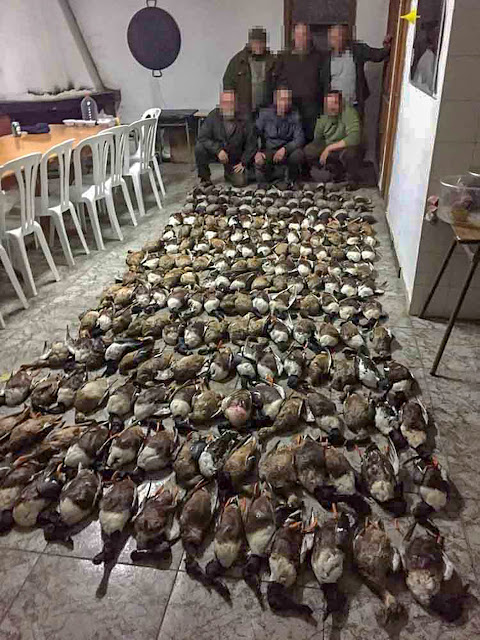 Proud to posing before more than 250 dead ducks,
Given the doubts raised by the content of the aforementioned photograph, regarding the proper control that the Ministry of Environment should exercise on the hunting activity in this natural space, the environmental group has addressed the Territorial Directorate in Alicante of this administration autonomic for, through a writing, in which a copy of the photograph is attached, request a copy of the report by which the number and species of aquatic birds to be shot in the hunting grounds of the Natural Park of El Hondo, during the 2017-18 season, as well as the censuses on which they have been based for its elaboration. AHSA also asks the responsible for the Consellería in Alicante, be informed of the number and result of inspections, by environmental agents in the hunting grounds of waterfowl of this natural area, to control the runs in the season of hunting 2017-18, in compliance with the provisions of its Master Plan for Use and Management (PRUG) which establishes that "For an effective control of the runs, it should be foreseen the presence of enough nursery in the spot; establishing, also, the necessary mechanisms to carry out the control on the pieces shot down (...) "
Amigos de los Humedales remembers that, during this hunting season, a preserve of this natural area was already the object of an intervention by the Nature Protection Service of the Guardia Civil (SEPRONA) for hunting during the night, completely outside the allowed hours , for which the hunters surprised in the preserve were denounced and the dead birds seized by the agents were seized.
AHSA is concerned about the significant impact that hunting has on waterfowl and the more than possible affectation to endangered species, such as the white-headed duck Oxyura leucocephala and the Marmaronetta angustirostris pardus and recalls that the legislation that regulates hunting has hardened in recent years, for wildlife. They give as an example that currently it is possible to shoot up to 2 hours after twilight, when before it was up to 1 hour after sunset or that the hunting period has been extended in waterbird preserves. Until the first years 2000 the season ended at the beginning of January, now it is possible to hunt until mid-February.
Finally, AHSA points out that despite the fact that hunting is authorized within the scope of the natural park, the Administration must exercise its control role as stated in the legislation itself.
Whichever way you look at it's still sick
I just don't get this mindless slaughter