BEYOND THE LAST MAN

My cousin the Fly

I've come from a big family, sadly there are not many of us left there were lots of aunts and uncles, cousins, second cousin, but there one who deserves  recognition my cousin Graham Vearncombe he was Cardiff City FC and Wales first choice goal keeper during the late fifties and 60s, when Cardiff was in the first division he was also in the squad, the last time Wales went to the FiFa World Cup in Sweden 1958.

The tournament also marked the arrival of a then 17-year-old Pele on the world stage.

And so it congratulation to Wales we're on our way and to the World Cup play offs
Graham Vearncombe: Helped Cardiff to promotion to Division One in 1958-59, made more than 200 appearances and was also a member of the 1958 Wales World Cup squad 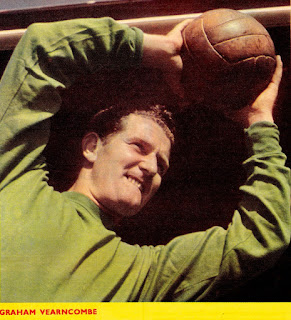