What another terrific morning we had in Estapas de Yecla.  It is one of our ‘must-go-to-places’ and over the years we found some great birds in this valley. we thought we should go there again and so we did on Saturday 6th October. 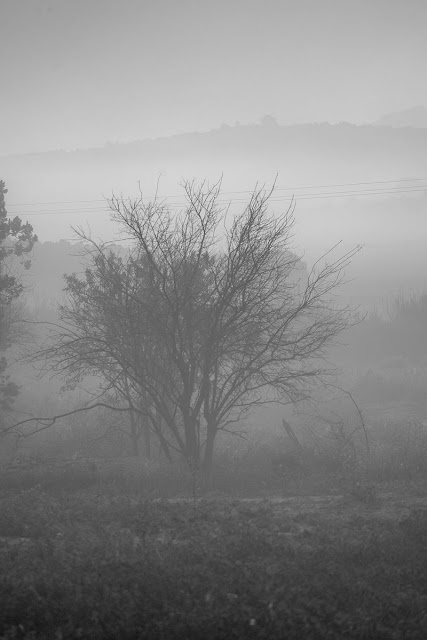 The temperatures have dropped and when we left Gran Alacant it was a mere 16 degrees and it went down to12 degrees in the valley.  We decided to have a coffee on route as the low cloud was so thick it would be impossible to see anything but by 8 am the mist was gradually lifting away and the sun was starting to peek through,  so we stayed to the east of the ridge having entered from Claudette.  We were soon bathed in sun and we were surrounded by birds and their songs.  Two hundred Wood Pigeons occupied a high wire and a big mixed flock of Goldfinches and Linnets flew from off the fields.  In one small bush, a dozen Goldfinch perched and we coined the term ‘ a charm in a bush’.  Towards the ridge and over the farm buildings Choughs called and flew, we heard them for most of the morning.  Other Corvids flew too with regular sightings of Jackdaws, Crows and Magpies, but no Ravens today.
It was great to see and still on the move a migration of Barn Swallows and they were visible all morning. Sad to see them go, but that is the way it is. 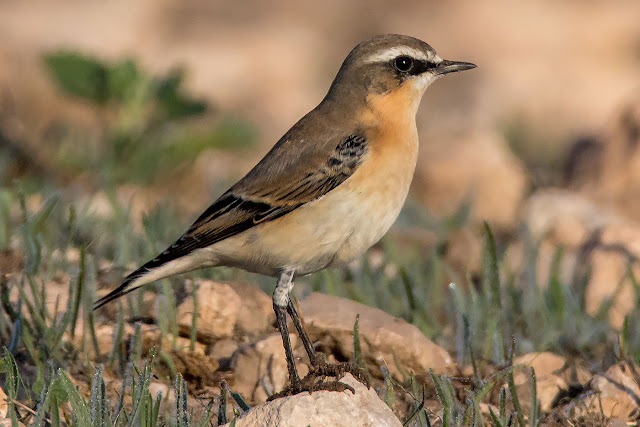 Northern Wheatears posed well and we must have seen over a dozen individual birds.  Several Stonechats called but remained elusive you don't always see what your looking for!
The ubiquitous Crested Larks showed well and eventually, we found a Thekla's Lark.  A major surprise was a male Rock Bunting which showed well for a few moments before disappearing in the scrub, a new bird for this area and now on the bird list for Yecla. 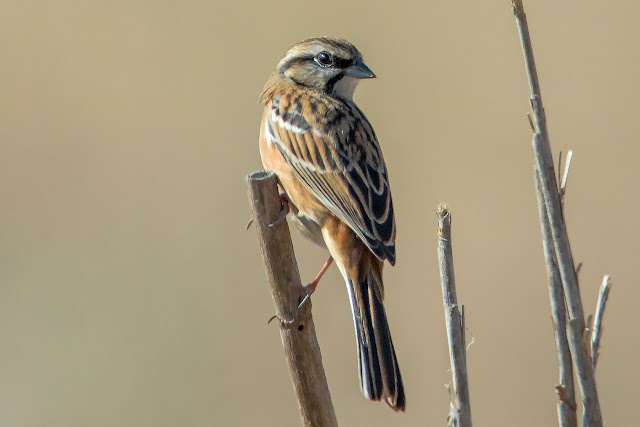 Corn Bunting, Meadow Pipits, and Chiff Chaff were seen one chiff bashing a large caterpillar about. 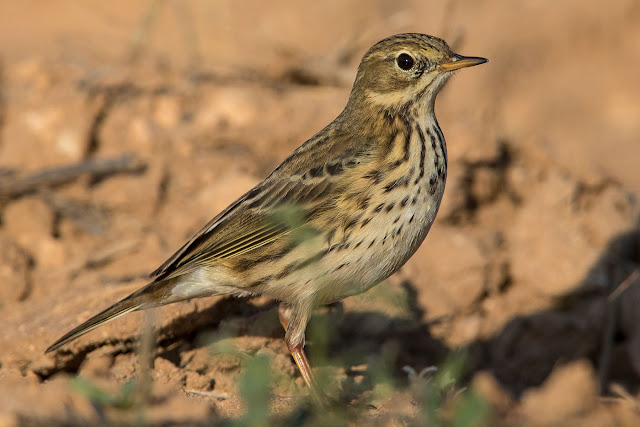 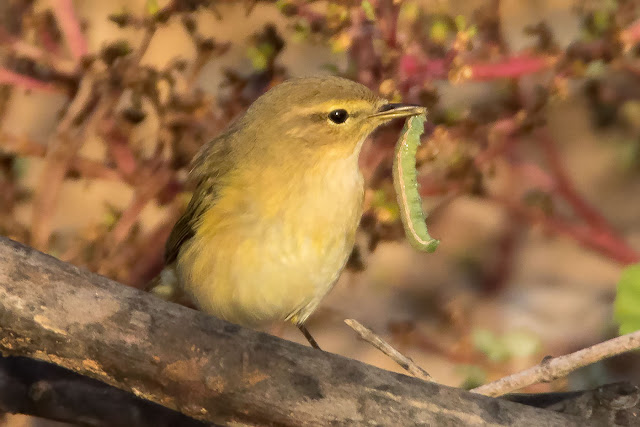 Around us were fields of vetches with some being harvested?  Two Hoopoes showed well and on an earthen bank were Rock Sparrows.  We spent over and hour and a half at this Claudette end before moving along our normal route where the mist had begun to clear. Red Legged Partridges ran all over. 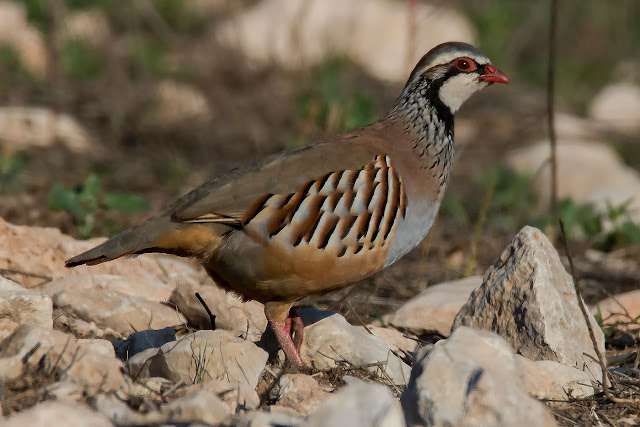 Heading towards the Yecla end of The Valley we heard Buzzards calling and at one time there were four of them circling on the thermals. 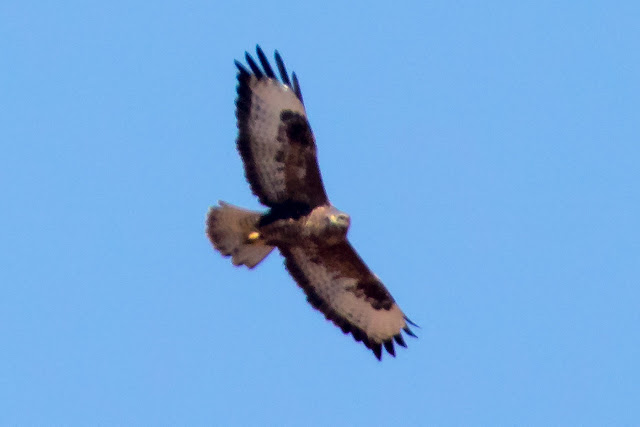 however, before that I spotted a Golden Eagle in the distance and this obliged us by coming closer and we could clearly see the wing patches and the white rump. We counted at least six individual Little Owls as we passed through and in the ‘wine area’ we had excellent views of both Tree and House Sparrows where the comparison with the two species could be seen.  Both sorts of Starlings were around too with many White Wagtails feeding. 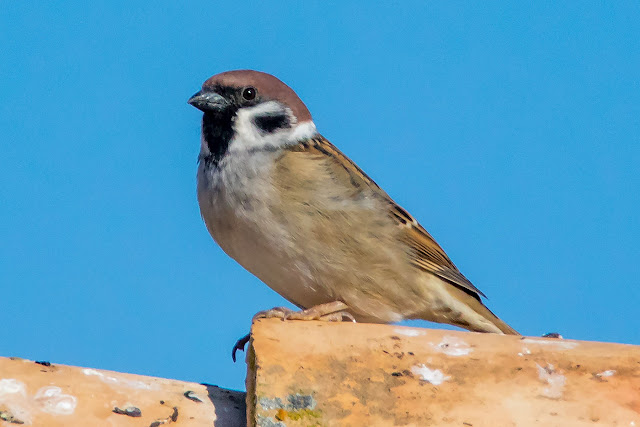 Moving on towards the ridge with pines a ‘falcon’ was spotted in a field, in the distance.  We knew what we thought it could be, but after 30 minutes and with closer views it had to be a female Lesser Kestrel. We had hoped for something else, but we were happy, that we had sorted the ID out.  A male Lesser also flew and I reassured myself that they still frequent this valley. Common kestrel also was seen close by.

We heard Sandgrouse but they stayed out of sight. The stubble in the fields is now a little higher making it difficult to see them. We noticed some butterflies, and in all, we think that we had four species. Lots of Bray White,  Common Blue, a few Clouded Yellow, Banded Greylings.
Also seen a few foxes 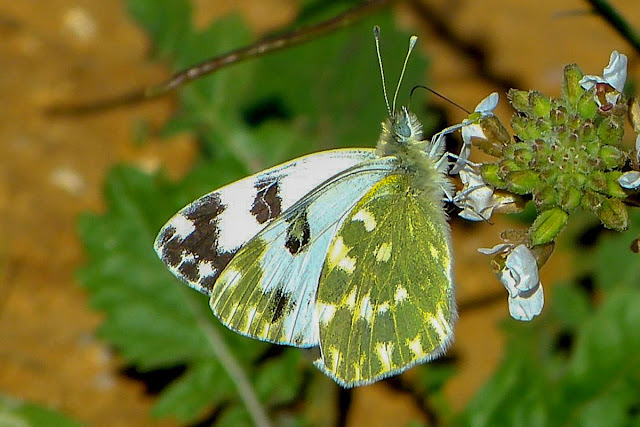 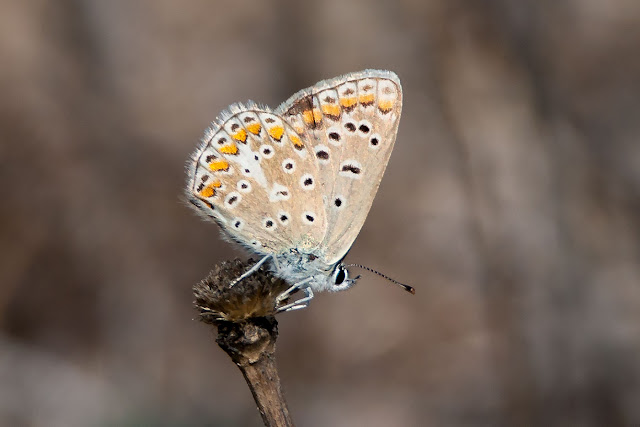 There were some absentees with Raven, Black Wheatears, and Calandra Larks being the more obvious ones.
What an excellent few hours and the most productive was the early ones as the sun came up and the mist cleared.  It is lovely to be out there
Below
I've added a few photos from my trip out 2 weeks ago, that I failed to write up.
On route to Montnegre, we stopped by a bridge over the Rio Montnegre it a fast flowing stream with not much depth and so in the stream I paddled to photograph these Copper Demoiselle Dragonflies