On Friday 12th October we made our second trip since the end of the summer, to Higueruela and it proved to be very good for the first part.  We turned right towards Higueruela, but we did not go directly towards the pig farm this time and took the second Camino on our left.  On turning, John spotted a flock of flying birds in the distance that showed white plumage.  They were so far away and they soon dropped from view; but could they have been Little Bustards? 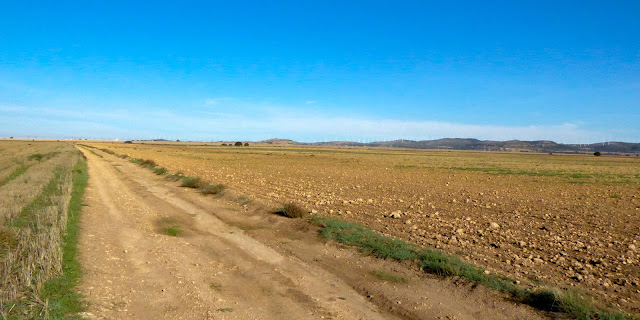 We are always prepared to work hard with the intention of searching out species.  But at the same time content ‘to take what comes’ and this morning was no different.  We both hoped to be able to find Little Bustards and maybe some early winter arrivals like  Brambling hiding with Chaffinches, or a Black Redstart. But It wasn't to be. But the search was on and the following paragraphs contain some of what we got up to. 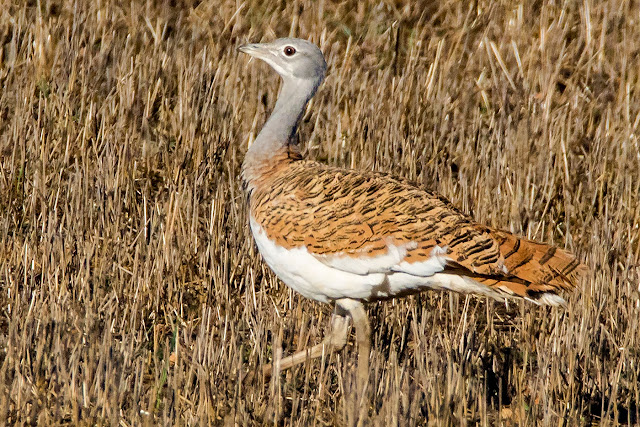 We had seen Great Bustards around the general area previously and we made the decision to approach from a different direction.  It paid off.  We first encountered a group of up to seventeen as we drove down a track.  They seemed oblivious to the tractors towing bulky trailers to and from the pig farm and they only moved slowly away from us, as we watched from the car, and not bothered by our close proximity,  we had very good views of this sometimes difficult and flighty giant to get close too.  We followed the track heading towards the railway and on the other side of it, there was another group of Bustards - about the same in number.  We checked them out hoping to find a Little Bustard, but they were all of the bigger variety. 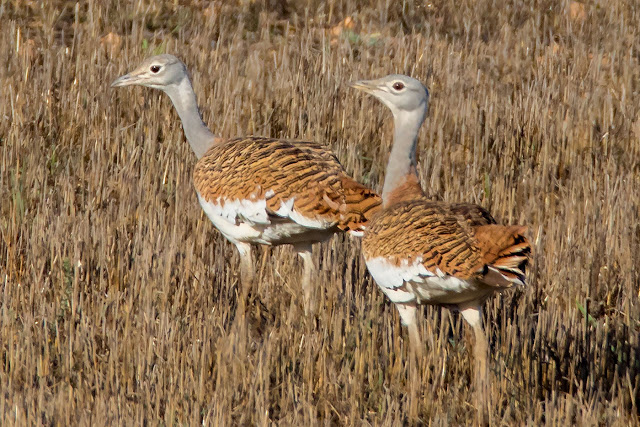 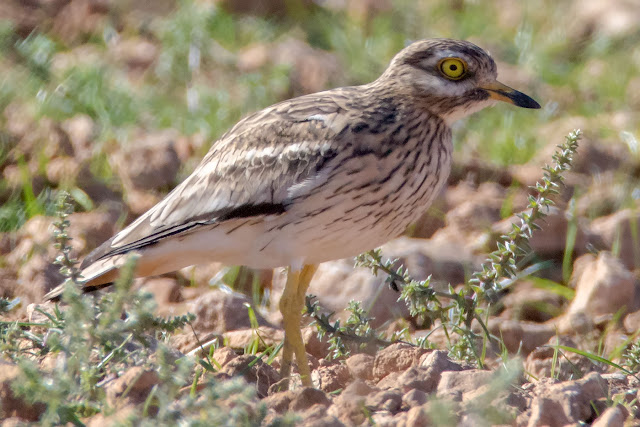 We were now at the station corner and to our surprise, there were around 20 Stone Curlews feeding in the field next to us.  On the sunny grassy bank, butterflies were active.
Along with our new route we encountered flocks of Goldfinches, Serin, and Linnets Rock Sparrow, Corn Bunting, and lots of Magpies. 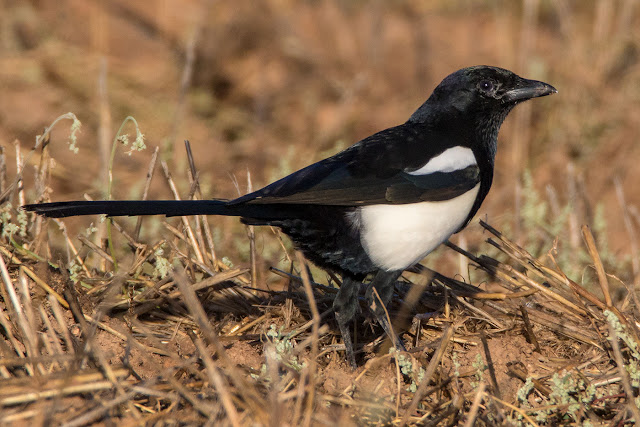 This was in a very mixed habitat that included natural verges, vines, corn stubble and ‘resting’ ground. Tree Sparrows were in abundance too and this is the new location for them. Spotless Starlings were easily seen and one occasion, on a wire, about eighty of the European type. 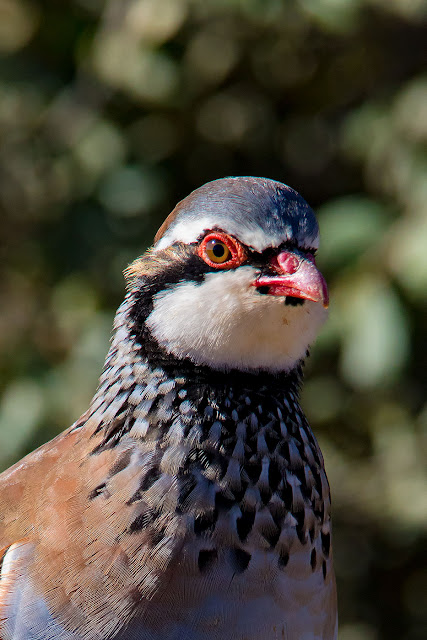 A Red leg Partridge stood its ground and refused to move we were only 3 meters from it and all I could do was some headshots.

The sound of Calandra Larks surrounded us and we had both excellent views of them flying and on the ground.  A Thekla's Lark perched long enough to be photographed, this was a very pale and cold looking and not what I would expect to see and is not the standard look for Thekla's Lark but I did see other birds in similar plumage. 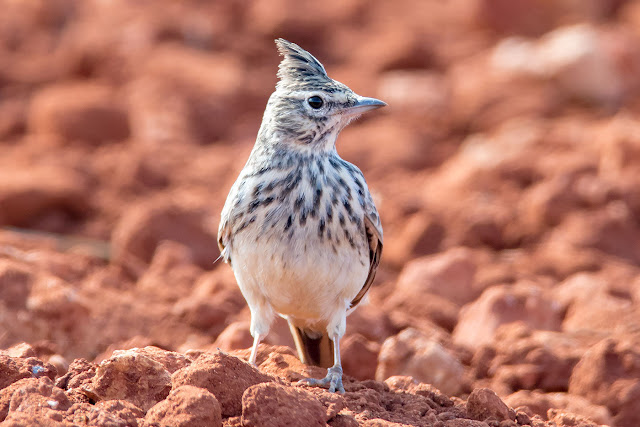 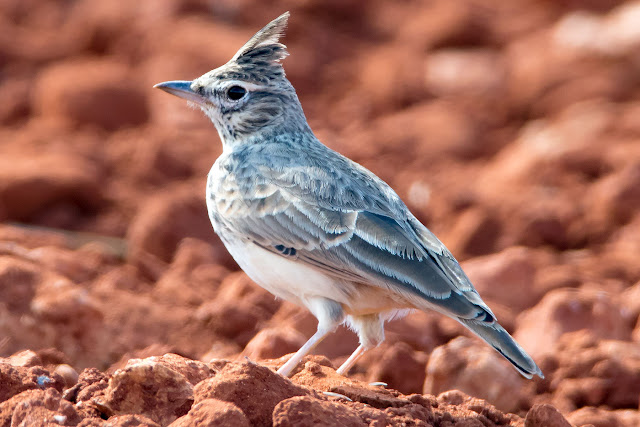 We moved on towards Higueruela to discover that this usually good spot, under the pines, was devoid of species. 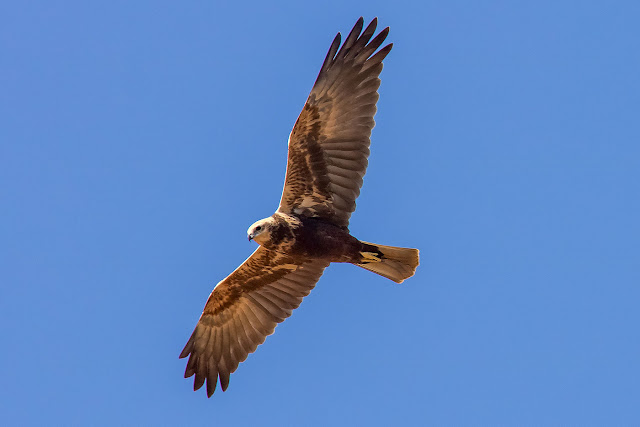 Lagunas de Petrola was again disappointing because the usually marshy areas were as dry as a bone and the main water provided little of note.  Two Marsh Harriers circled over.  On leaving, We spotted seven Yellow Wagtails by the farm buildings.  I was hoping that they would be Iberiae but the were all flava Yellow Wagtails.  I was glad to see them as  they lessened the disappointment of yet another crappy visit Petrola.

Petrola has turn up some great birds, so to dismiss it, would be a mistake, so I guess we just keep looking till things change? 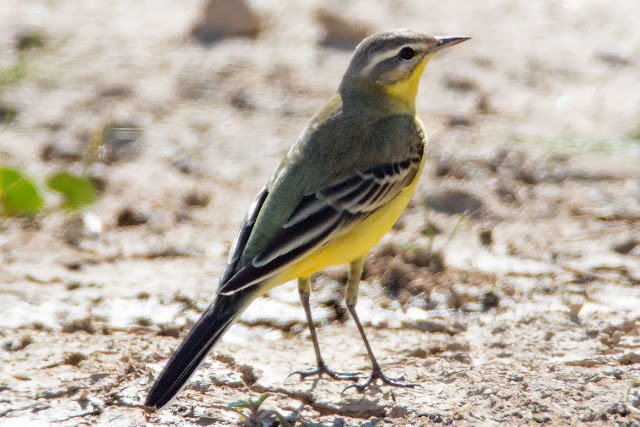 Heading towards Corral Rubio we saw nothing of interest and again many areas were dry as a bone.  It has rained, but much more rainfall is needed.  Now, in the early afternoon, we went to Montealegre del Castillo, where we knew we would find water.  On earlier visits, this was teeming with water birds, but today very little, White-headed Duck being the best of it. This may have been due to the day being a ‘Red Day’ and the hunters were all around.  On our next trip, we will make this water our first objective and also research the areas around it.
I have not mentioned every species that we saw, only ones that create more of an interest.  It is a vast area with big wide open vistas.  We find that it is good to be out there seeing the natural beauty of things and today with the sun and vegetation played host to several species of butterflies 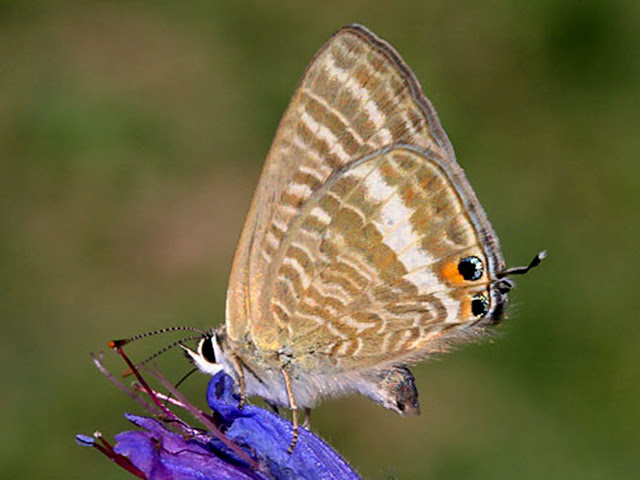 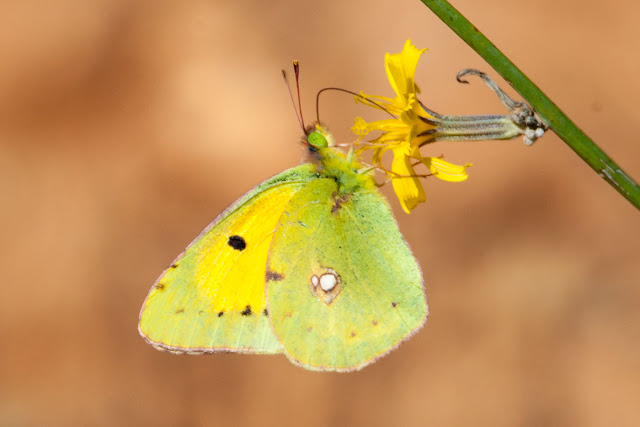 Clouded Yellow
we did have a great days birding, but it could have ended so much better with just a bit more water to fill up the pool and lakes, some more Ducks, afew rare Waders, a couple of Golden Eagles, and Montague's Harrier thrown inn.
It would of been perfect!
its not to much to ask is it?
Maybe that's for next time!
Have a nice day
Cheers Bryan
- October 13, 2018