And after ages of no Birding.
And 3 months since lockdown on March the 13th.

Yesterday we got out to play, " hallelujah"  And we headed for Montnegre our target bird was the Elusive Trumpeter Finch.  I might have to rename this bird and drop the elusive bit as we see them every time we go there, now we know where to look. This must be up there with one of the best sites in Spain, for where to see these so-called "elusive" Birds. having said that it has taken a lot of effort to find them, and so its relatively easy to see in them in spring, summer or early autumn,  as yet we don't know where they go in the winter. 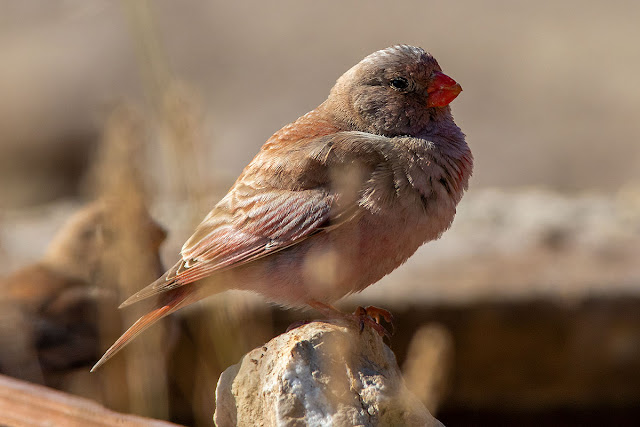 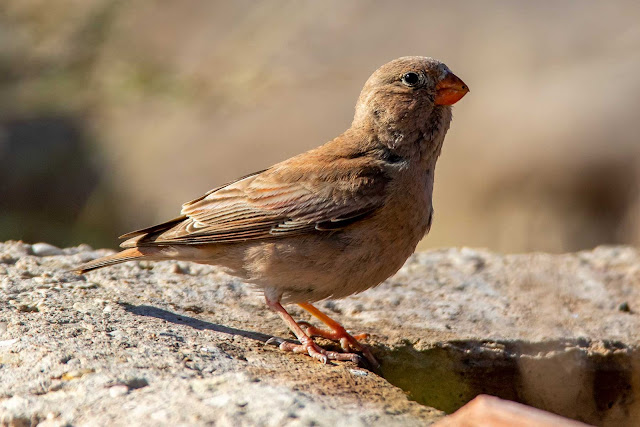 It was Tea time and a slab of chocolate cake was in order.
Other Birds of note in the valley were Blue Rock Thrush, Black Wheatear, Nightingale,
Spotted flycatcher, Kestrel,  and lots of little finches types around.
And at the Tibi end of the valley, there were a few Griffon Vultures and  I did hear very briefly the song/call of Black-eared Wheatear. 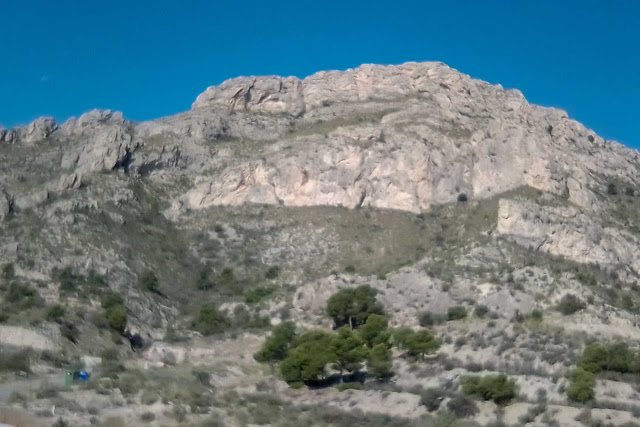 crap photo
Once at the Tibi end, we didn't waste time and head off Maigmo Mountain only stopping a few time on the way up the mountain.
In a shaded area and picked up Coal Tit, Long-tailed Tit, Great Tit, Short-toed Treecreeper,  Chaffinch, Crossbill, and we heard a distant Woodlark,
No sigh of any Alpine Swift, but a few Pallid Swift put in an appearance. 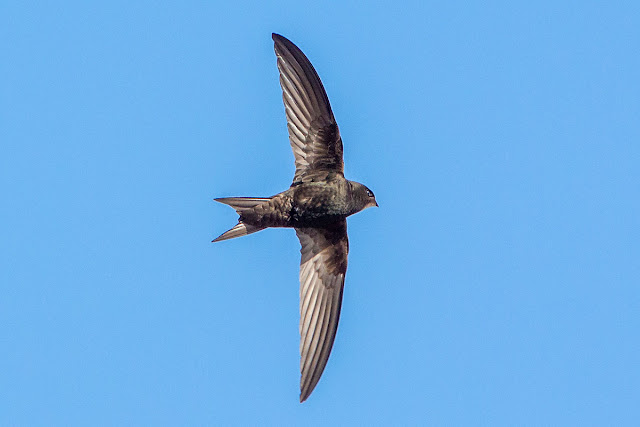 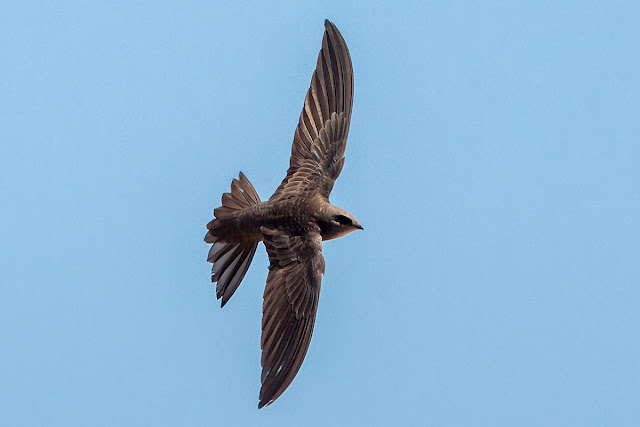 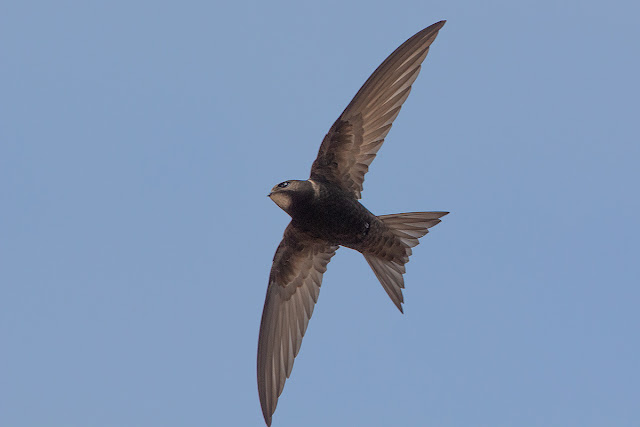 Pallid Swifts
The
Moment of the day.
Didn't come from our feathered friends or Butterflies but a lace Wing and a Fly? 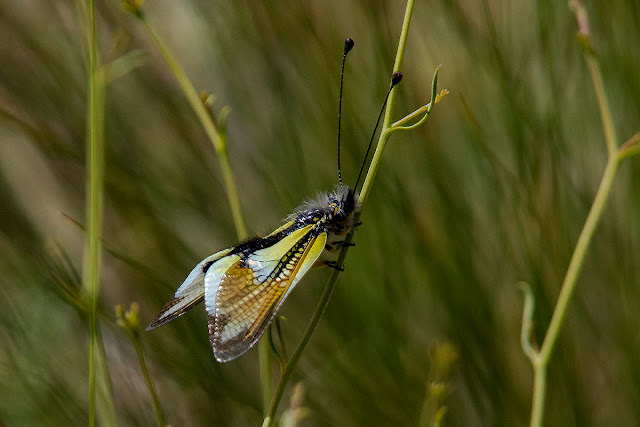 I got a bit excited when I saw this yellow coloured insect with transparent wings I said to John and Michelle get on this, not knowing what family it belonged to, it was something different.  We all had different ideas of what it could be.
I thought I might be the type of Burnet Moth but with an antenna of a butterfly? Was it a Dragonfly? 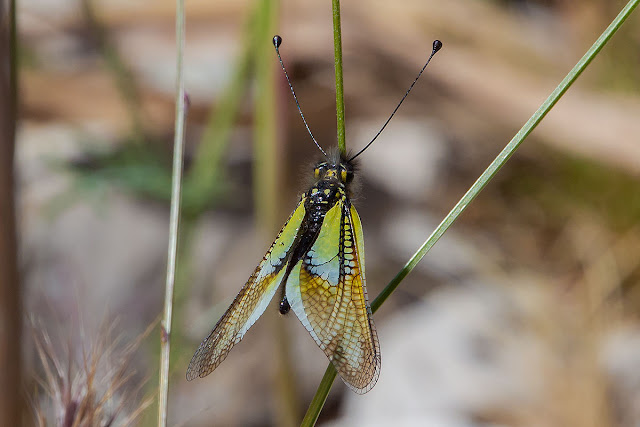 There was a second flying insect dancing around with beautifully marked wings and two elongated tails was this the female of the yellow insect? We had no idea.
We got busy photographing the bugs to document our find.
I've found out the yellow winged bug is Owly Sulfur fly
How can a fly look so good? 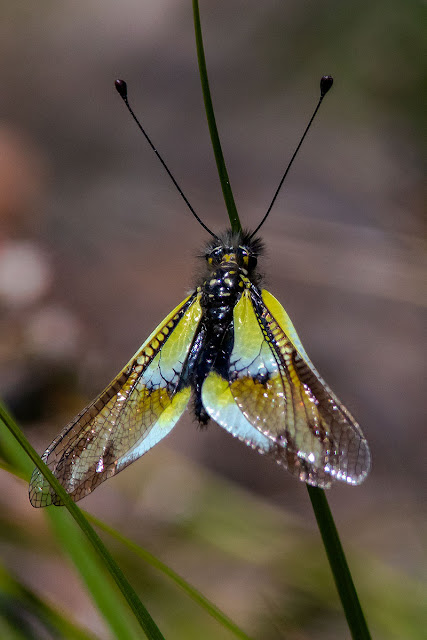 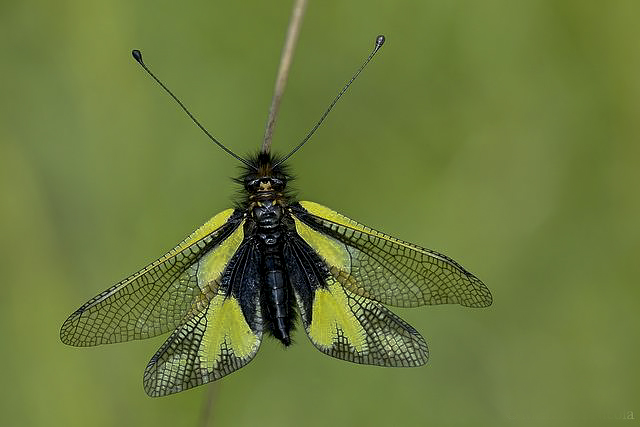 DESCRIPTION
The adults reach 25 millimetres (0.98 in) of length, with a wingspan of 45–55
millimetres (1.8–2.2 in). [3] The body is black and quite hairy. The eyes are
large and bulging; the antennae are long and clubbed. The wings do not have
scales and are partly transparent, with bright yellow areas in the first third,
dark brown on the external side. An elongated black area is present towards
the end of the posterior edge of the wing. The venation is black. The wings
are held spread at rest, as in dragonflies.
From the family ASACALAPHIDEA and sub-family ASCALAPHINAE
Owly fly mainly inhabits areas of tall grass and sunny rocky slopes up to 1500 metres.
This was the right location for them on this Limestone ridge. They are considered rare and can be seen in
France, Czech Republic, Germany, France, Spain and Switzerland.
And the other Bug was a
Thread-winged Lacewing or Ribbon Winged Lacewing, Nemoptera bipennis 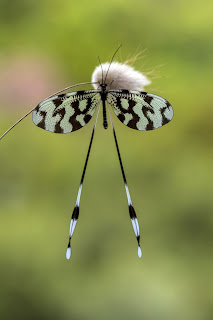 It's one of the most beautiful Iberian insects I've
Ever seen, it's  sometimes called Wood Fairy or Threaded winged Lacewing known as Duende in Spanish which translates to Elf or Fairy
The beauty and diversity of nature never cease to amaze me and I may have to go back there and sit down quietly and watch them dance one more time
"unbelievable"
It's great to be out and about once again, enjoying nature.
Big thanks
John and Michelle
Have fun
Cheers Bryan