Good Name for a Band

I'm a little slow posting this blog due to other commitments.

3 degrees this morning and cold with clear sky's, that's freezing for Costa Blanca. The forecast is hopefully plenty of birds, finger's crossed?  I'm always hoping to find something rare and with storm, Filomena now blown its self out, dumped a load of heavy snow through most of Spain and a massive temperature drop, hoping It's going to have the right effect and push a few birds further south?

So to start a few Black-tailed Godwits, Common Sandpiper, Dunlin, Ruff, Great white Egret, Audouin's Gull, lots of Slender-billed Gull, Lesser black-backed Gull. The normal canteen of Spoonbills (20+) all roosting with there head up their ass in the icy cold wind, and with a small number of  Reed Bunting's it was a promising start.

We're still trying to catch up with Tonn the Great spotted Eagle, we heading for his favourite area. It's not such a big deal not to connecting with the big one, as we're finding other birds as we search. On route a field of Golden Plover (37) with a few Lapwing and a flyover of a Merlin,

we spent some time scanning for Tonn and the usual raptors few past it was cold on the platform the highlight was a cup of tea and a thick slab of Trish's constipation busting fruit cake and the resident Iberian Southern Grey Shrike perched in his favourite tree.

The recent heavy rain has made most of the paths and tracks impossible to walk on.

( lots of sticky mud ) So we stayed close to the car park and boardwalk, to be honest, its the best area and that's because there's some muddy margins and areas of stubble. No need to go any further for now just watch this area It will turn up something?

A Jack Snipe bobbed up and down, it's only the 2nd time I've seen a Jack Snipe in Spain, so this is a good bird to connect with.

Thanks to Darren Wilson CBBC

Read my first Spanish encounter with Jack Snipe 2017 review  below

Suddenly my attention was grabbed by a small white-sided wader drilling in the mud I knew before my binoculars got to my eyes what it was, I shouted to Trev, "Jack Snipe" we quickly put the scope on it to confirm the ID, and off like a rocket! like Usain Bolt back to the ******* car for my camera, cursing all the ****** way there and back my stupid decision making, leaving the camera behind, I arrived back, I shouted is it still THERE! "No" Trev replied but you should have been here 30 seconds ago it was right in the open, it's gone now!! he said!  ( I think Usain Bolt would have been proud of me as I set a new World Record for the car and back )  more bad language followed, followed by more, now they're a bit of history about this bird "Jack Snipe." Trev and I have been searching for many winters with no success and just bad luck not connecting with it, although not a mega ( although it feels like ) it's a Spanish tick for both of us. The Jack Snipe did re-emerge and I got a record photograph but it was more than three times the distance away. 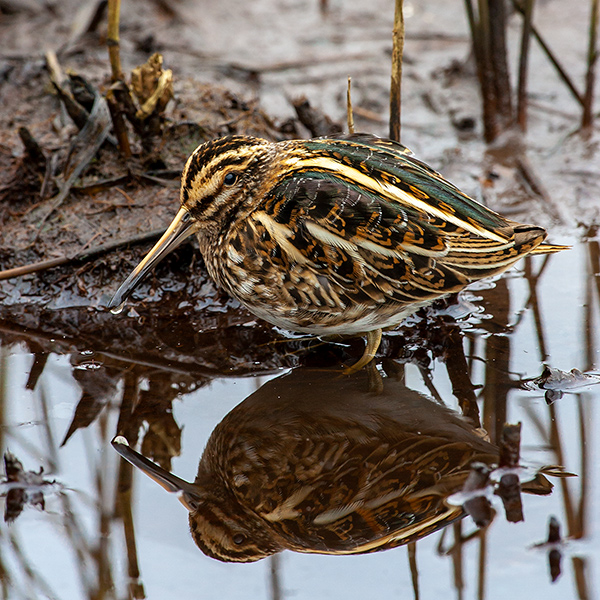 Jack Snipe from Isles of Scilly 2004 A regular winter visitor

Back to today's Birding

Also, their Little Stint, Water Pipit, several Purple swamp Hens, showing off and posed for a few headshots and photos. Can you just imagine one turning up in the UK and what havoc it would cause, underrated and beautiful?

Squadrons of Glossy Ibis flew past in a V formation. Impressive, how'd they know to keep the distance and drag to a minimum? Not one Kingfisher today and only a few Crag Martin I've read on the internet that Crag Martin have been dying in there thousands due to lack of food and cold.

I have to mention Hoopoe, these flying pinky zebras, are fearless and so tame at least 6 today, and 3 of them refused to move an inch, and almost got run over, and one thought about getting in the car

John and I had a Werther's sweet caramel moment to celebrate the solo performance.

The mega Serin flock is still in the same field but also there Tree Sparrow at least (15+) the same route home we passed by the field of the Golden Plover and they'd magically turned into Lapwing with a few Golden Plover could it possibly be a magic field? who knows but if it is magic could I be granted one wish,  I'd wish, for American wader, please.