Has Boris Johnson got it Wrong for UK

Day 10
Lockdown
I feel safer here in Spain than UK

I'm getting fed up with the UK's Dither and Delay
It is unbelievable,  to watch the UK Sleepwalking into the biggest crisis ever.  I don't understand the UK's stance of voluntary distancing it is clearly not working.  What the UK government needs to do is lockdown and do it now.  Boris Johnson, the UK government and advisors should have implemented a nationwide lockdown quite a few days ago.
The Dither and Delay is Unbelievable. 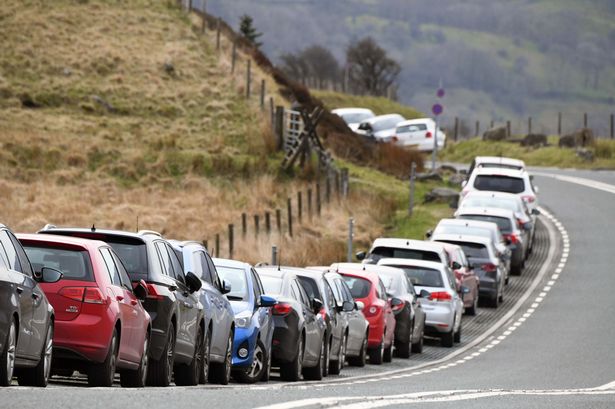 Watching the TV, I keep asking my self why oh why there's no proper lockdown.
It' will cost lives? 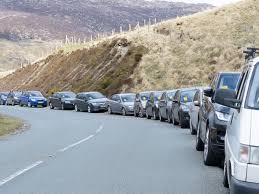 Boris, you've got it Wrong your to hesitant
Get a grip! Your dreams of being another Winston Churchill has gone up in smoke. 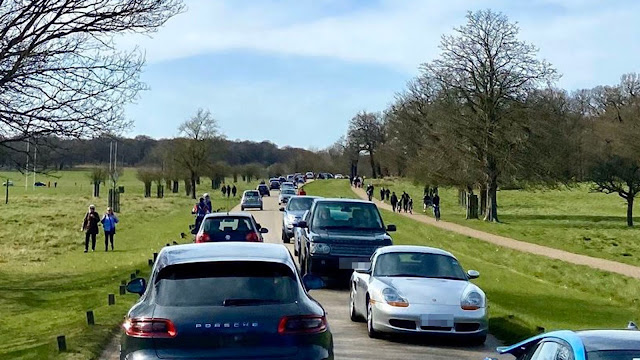 Dithering will cost lives.  It might well come back and bite Borris in the Ass, it may even cost him his job? For the Dither and Delay. 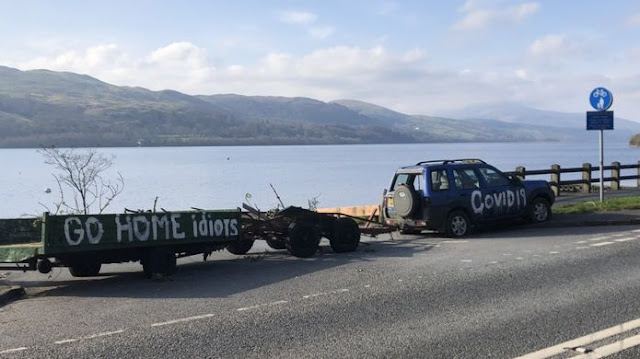 If Your Going Through Hell Keep Going

The shocking centre of the COVID 19 Crisis

I've not been far today just a trip to the bins, I was a bit shocked by the above filming but also from the comments of Reporter and the Doctors,
What the reporter said, was that all you can hear is the sound of ambulance sirens all day and night taking people to the hospital!

Here's a Facebook link from last night of police and others from Madrid showing support for the hospital workers.

Click and the link below into you browser to view

Police and Ambulance services show of support in Madrid

UK Now's followed the rest of Europe in shutting down and not before time, Boris Johnson should have done it a week ago?
Have fun

Bill Gate predicted this pandemic in 2015

Last night the Army moved in, the local police are stopping cars and fine them if more the one person is on board without good cause!
And if I am reading the signals right we are heading headfirst for the worst economic world recession we ever had. At our local Lide supermarket they are not taking coins and paper money as payment? This might be gossip but it did come from a mate. 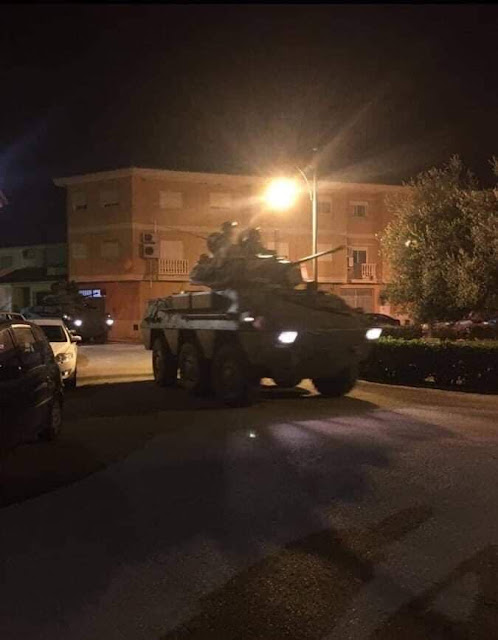 British Tourist have been order to return to the UK by March 24th.
There's some gossip the our lockdown may continue for longer than the initial  15 Day period??

Well only day 4 and confined to barracks, trying to keep busy and doing all those shity little jobs that I've kept postponing to do for ages,  I've sneaked out to check the pools and gardens that I look after for my clients. Not seen anybody on my rounds. It's completely dead of people.
but mindful of the police are going around and hand out fines, yesterday 199 people fined for not being out with good cause! There's no panic buying after the initial surge and people are now acting responsibly, plenty of food in the Supermarket. 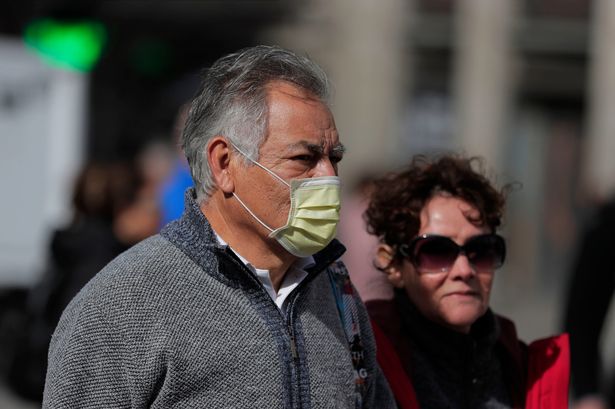 It looks very likely were in for the long haul.
I think I can do 15 days no problem and keep busy for that amount of time, but  to fill up for another 15 days might be a problem, which there predicting or longer might be a problem 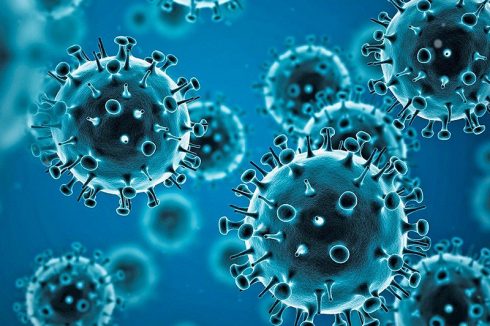 I thought back over the New year that the images of all those Chinese JCB preparing to build Hospitals in 7 seven day it was only going to get worse
But I never though it would come this bad to Spain, Italy, and UK 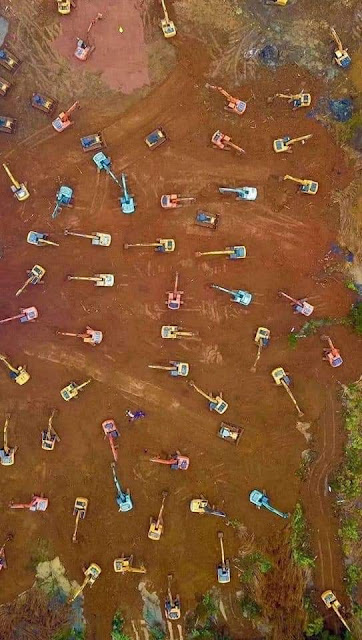 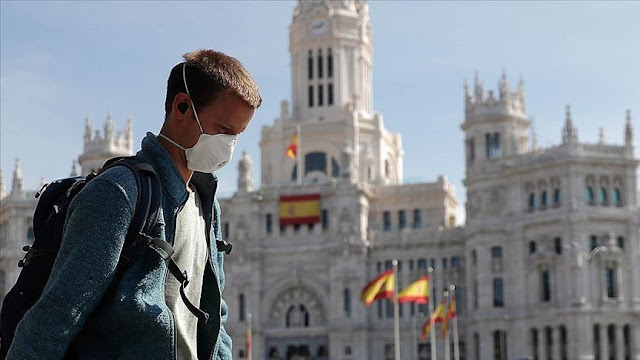 No birds to report
Cheers Bryan

Lock Down
Well, I made it back to Spain on Saturday. The Rugby was cancelled, why oh why didn't WRU  cancel some days before??? 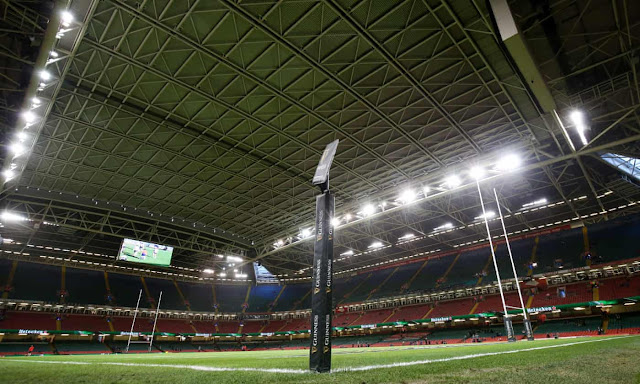 All the Scotts had already travelled to Cardiff???  Bus's had already arrived Full of our Celtic Mates. The Bar, Pubs and Hotels in Cardiff were full with the welsh and Scotts fans enjoying themselves.  So what did it achieve Cancelling the game as all the supporters were in Cardiff anyway.
A Right Cock up.
Thanks, WRU. 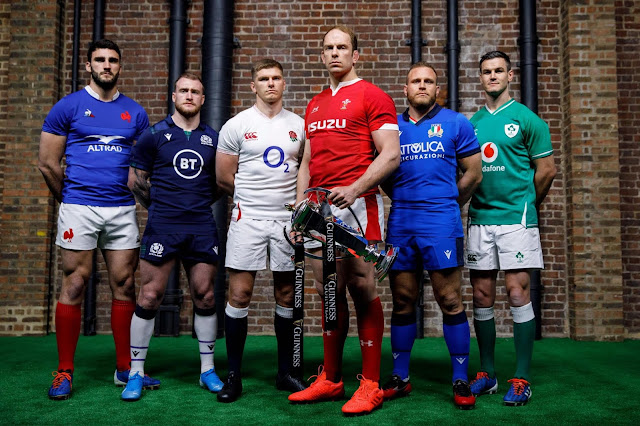 Since the lockdown in Spain, nobody's able to get in or out, more or less you can't go anywhere, just to the Supermarkets, walk the dog, (I don't have one) go to the Rubbish bins. Or Doctors or Farmacia. 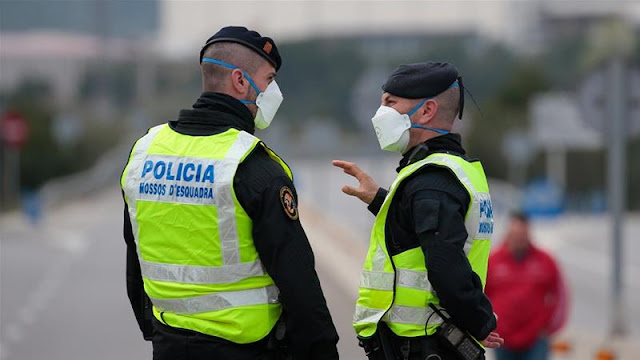 GRAN ALACANT  is like a ghost town and with everything shut down.   The police are enforcing strict movement ( and are handing out fines for people not obeying the rules ) It looks like no birding for months, except for what I hear or flies over's close to my casa.

Latest news it looks it could be August before it levels out? Oh my God, ITS now the UK's TURN TO BE LOCKDOWN. GET PREPARED it's not nice, Italy is in the front line and they have been warning of what's to come for us in Spain and. the UK.
With 250.000 UK Deaths Predicted, IT getting Scary.
GOOD LUCK
EVERYBODY
BT


Well it's been an odd few weeks since the New Year, it now looks like there could be a pandemic, on the way.  "Hopefully not"  I've not been birding much and to tell you the truth I've only really been birding the Clot De Galvany and with nothing very much out of the ordinary to report, I thought it's not worth the time and effort to write up.  As i didn't want to report no news.  John Edwards and I did manage a morning's local birding and the highlight was the Greater spotted Eagle and a singing  Iberian Chiffchaff which was good.

Some things of note at the Clot there was a Ferruginous duck that was very distant but that was a few weeks ago.
Last week at the clot, 1st of March there was a few Swallows, Sand Martin, House Martins, and Red-rumped Swallows and a very nice Garganey which disappeared into the reed not to be seen again?

The No Bins Bird Club has been hit with some ill health not surprising as we are all getting on a bit, but happy to report were all on the mend, and are now ready to go Birding and make the news.

This week my Birding buddy Trevor arrived and was in need of a birding fix.

Sunday 8th March
Santa Pola Salinas
Nothing mega to report, but some nice birds to be seen, an Ospery flypast with fish in talons was nice, plenty of Black-tailed godwits mostly in summer plumage. Good numbers of Ruff,  about 12  Widgeon, 2 Penduline Tits was a surprise find.  Also Yellow wagtails, and Blue Throats. Quite a few Mediterranean Gulls in full summer plumage. The final tally for our 5 hours was 58 species. 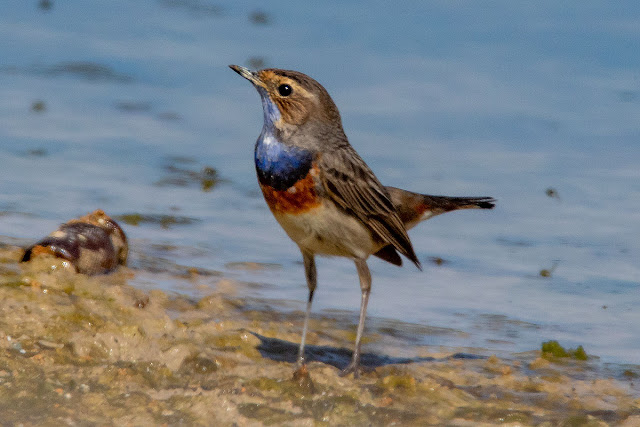 Our target for today was the very elusive Trumpeter Finch, last time we visited Montnegre was late September and we didn't connect with these star birds and it led me to believe at that time they were just a summer visitor to this area, and today Monday 9th March we heard a few calling, then I flush 2 birds which flew away, shortly after,  2 more birds arrived from a different direction, which makes me now think that they are very probably,  a resident in this area. Although scarce in numbers. An obliging Red-legged Partridge showed well 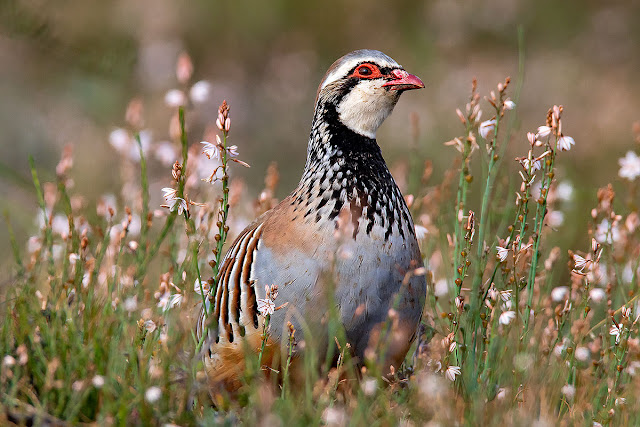 Yecla
Tuesday 10th
It's not a big list,
but it's not about the numbers, it's about quality and also the views you get?
And so today we were a little late arriving due to the major road works and rerouting of the main road and a missed turning twice,
Star Bird of the day was a Golden Eagle x two with good views, 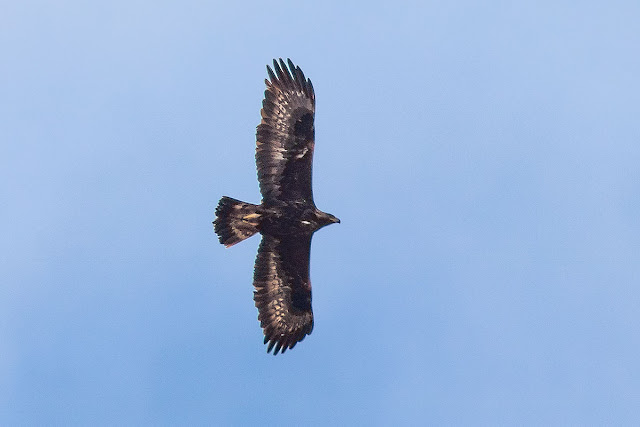 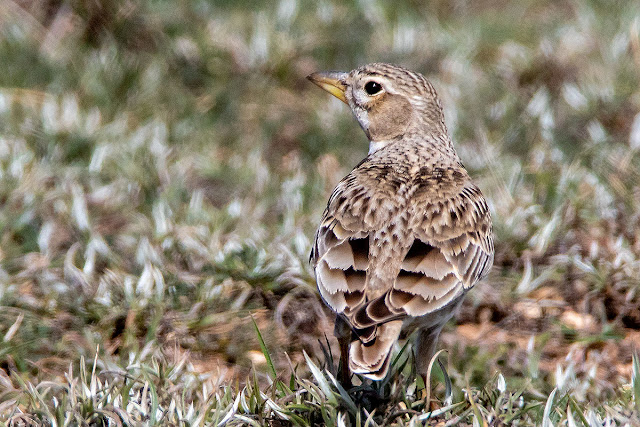 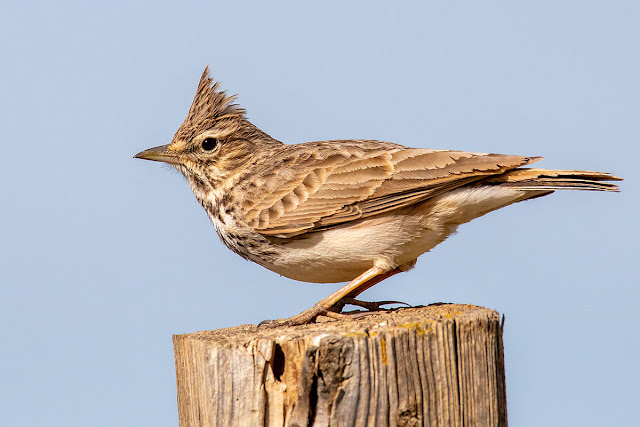 Thekla's Lark
not 100 percent on this bird? 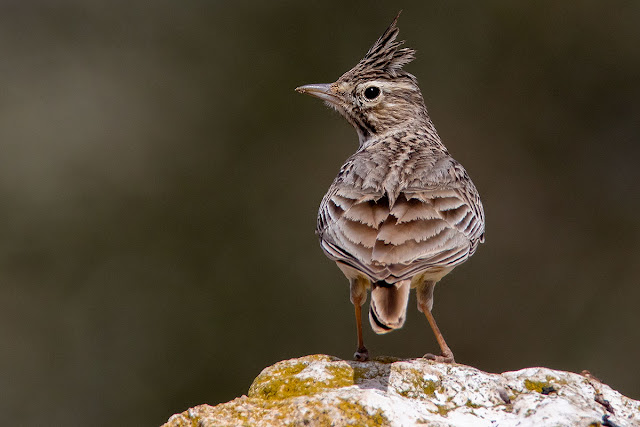 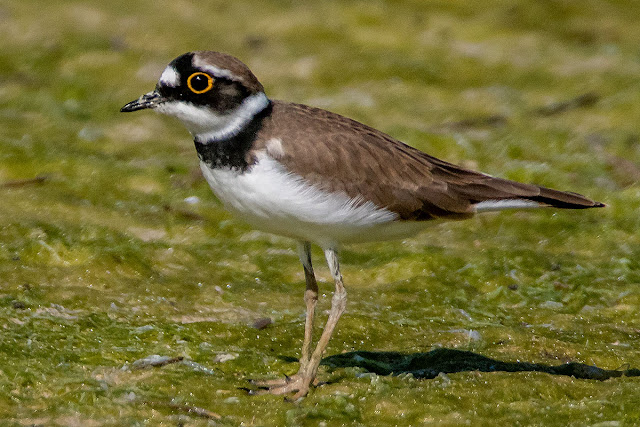 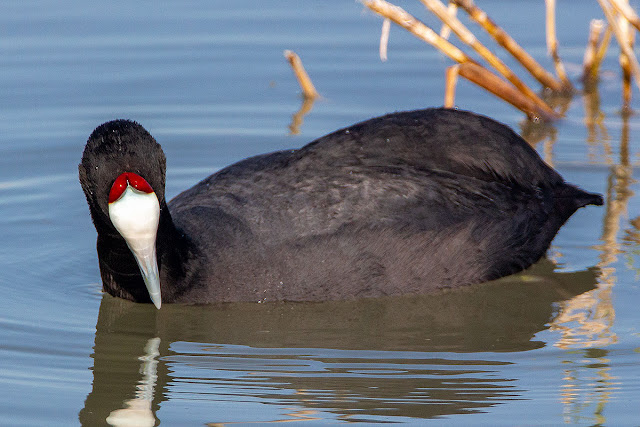 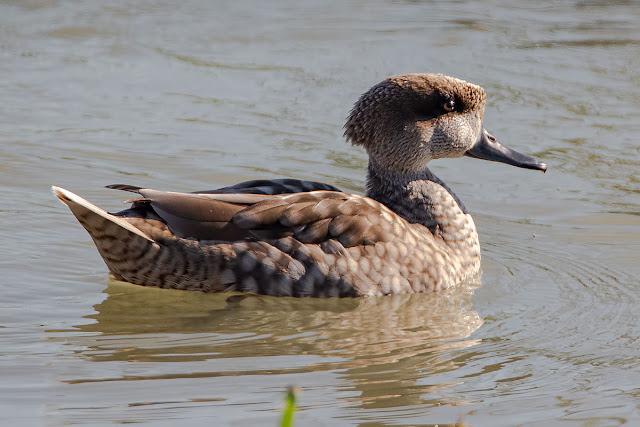 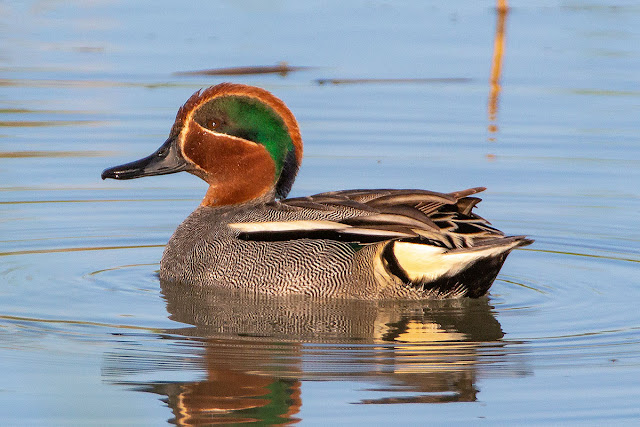 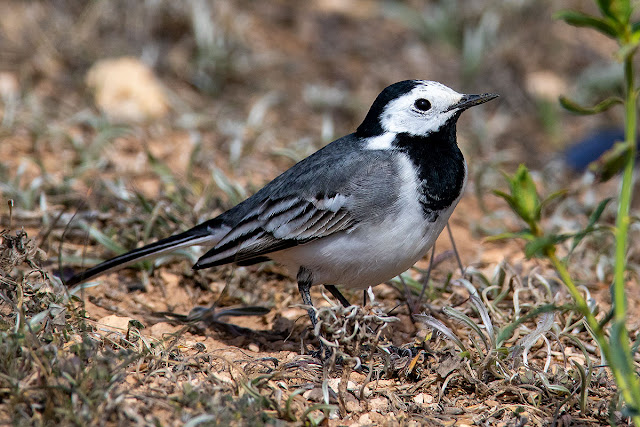 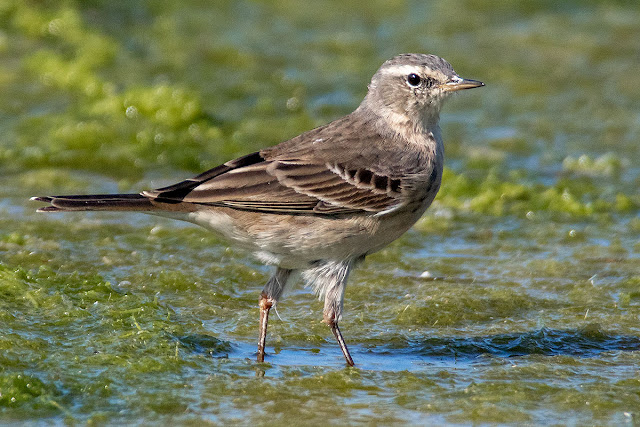 And later at
Sante Agueda 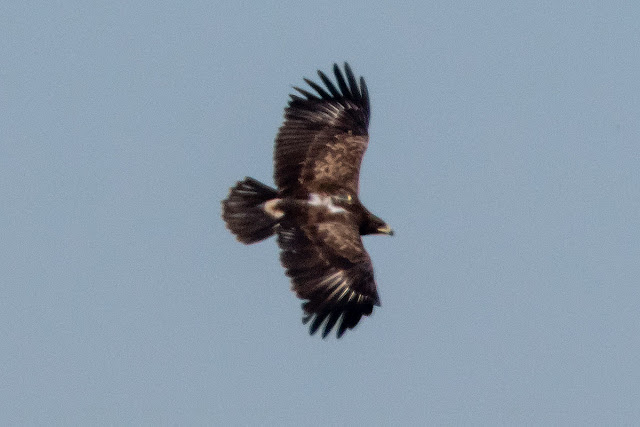 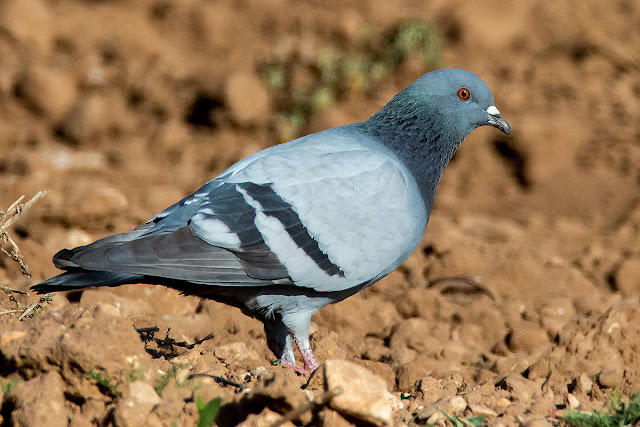 And that's was the end of Trevor's birding visit. Tomorrow I'm off to the UK to watch Rugby in Cardiff, fingers crossed.

I can't stop thinking what's going on in Wuhan and Italy with the covid 19 virus
Hopefully, our politicians have been listening to the news? I've got a funny feeling this is going to turn very nasty over the coming 6 to 9 months or even longer watch out?
Everybody
Have fun
Cheers BT