I think it’s a LE / WRH hybrid, one of quite a few that’s doing the rounds of Spain - mainly the larger wetlands such as Ebro Delta, Donana, Albufera, I even had one at Pego Marsh many years ago.
Hope this helps buddy Jules Sykes,

Hi Bryan,
Very interesting, my first impression is okay, though with the intermediate birds it is difficult. I will look carefully
Stephan Cramer
CBBC

Hi John! I am glad you had a good morning. To me, it looks like a hybrid of Little Egret and Western Reef Egret. It has characters of both. I think someone might have seen one weeks ago in the Salinas ( BT no mention of where it was seen or which Salinas ) But a Very Nice finding! Best regards
Pau Lucio President of the Association of Bird Guides

whichever way you want to spin the wheel, it its a very very good bird for the Provence Alicante and more importantly for the El Clot wetlands and with a newly Confirmed location of the Elusive Trumpeters Finch its all looking good for Birding Costs Blanca

Hopefully, We're gonna turn up something
special in due course?

Have a great day
Major thanks to J and M Edward

Thanks to everybody who visits my Blog

Glad you've taken the time to visit
Make some news.

These Feet Were Made for Walking

After walking the complete circuit of the Clot, four and a half miles in my worn-out Crocs.  I couldn't wait for a sit-down,  my feet were killing me I've never been happier to see a wooded bench and a hide.
Scanning for Night Heron in the roosting Heronry Tree. 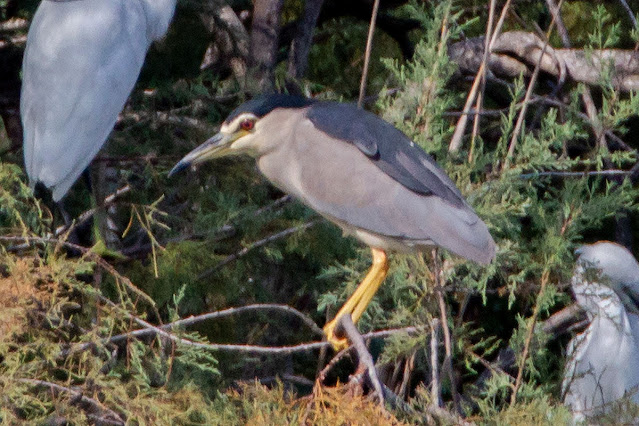 So it wasn't long before I notice Little Egret type flapping its wings,  but the wings were light Grey and not White. I thought straight away of a Western Reef Heron "I said get on this" although partially obscure we all could see the greyness in the wings and body.
We watch and debated for a few hours waiting for it to show on the outside of the Tamarisk Tree, the bird was continually preening. I didn't take my big lens as we were walking and wanted to travel light. big mistake? and so most of the photos are nothing more than record shots due to the distance involved
And while we waited a Gadwall swam into view, I Lost it trying to point it out to John and Michelle, only to find a Ferruginous Duck in the same area. 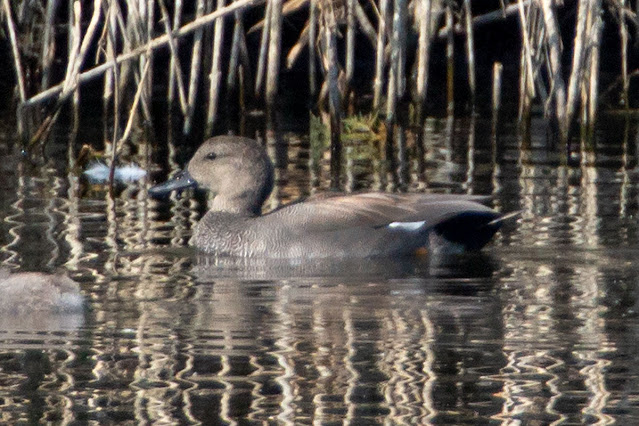 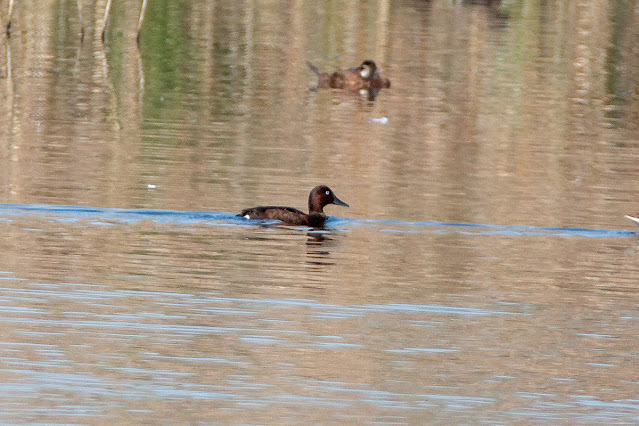 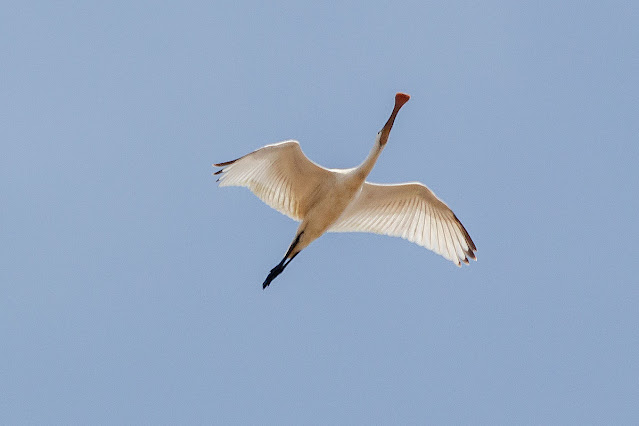 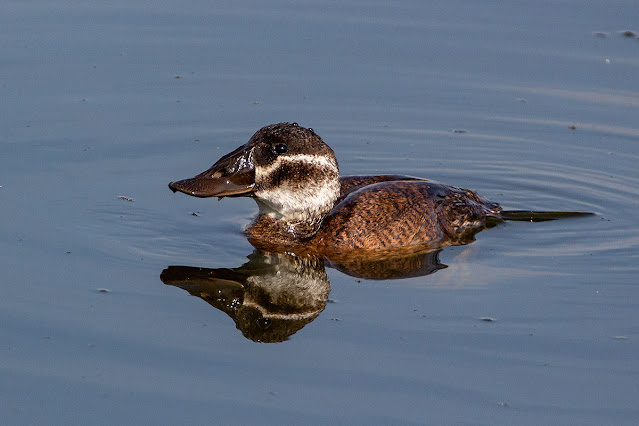 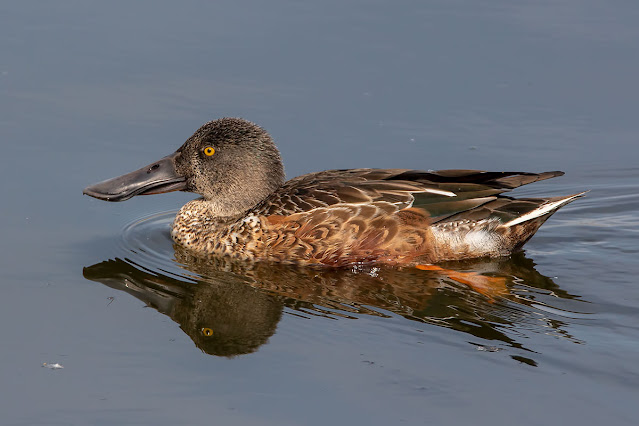 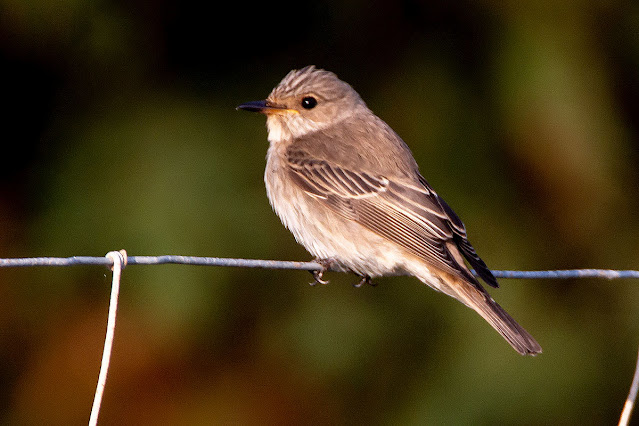 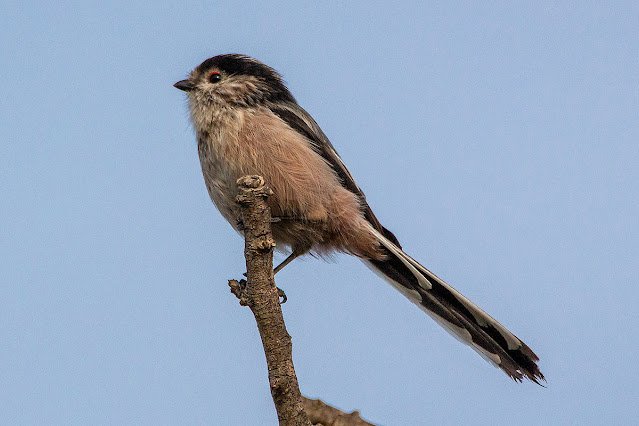 Have a Great Day
Cheers BT

BREAKING NEWS
Good Evening
Everybody
Its late
I just wanted to get the news out fast, after much checking with some other Birders and experts
There's a possible Western Reef Heron at the Clot De Galvany see photos 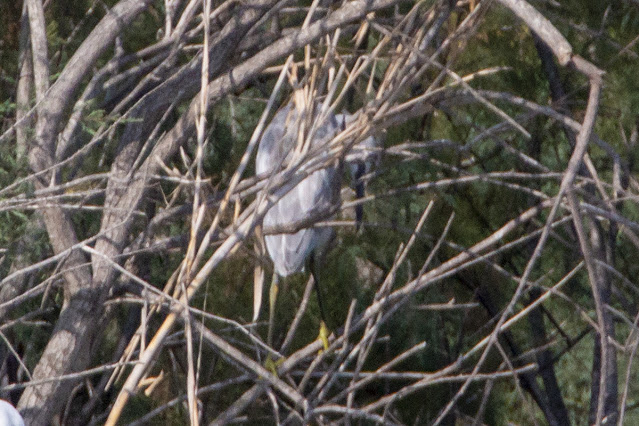 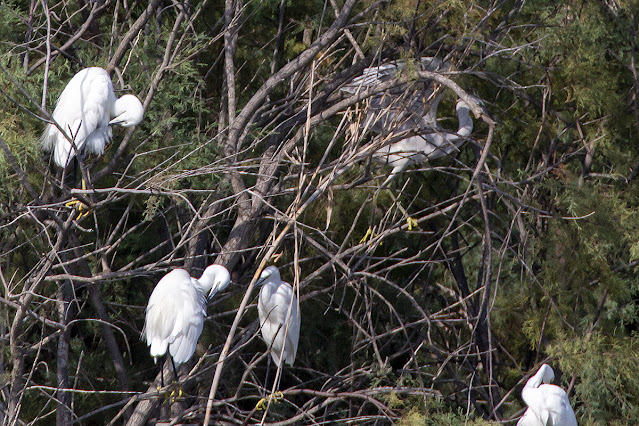 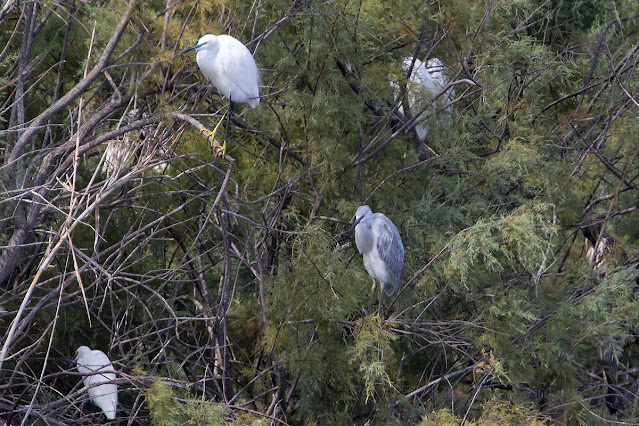 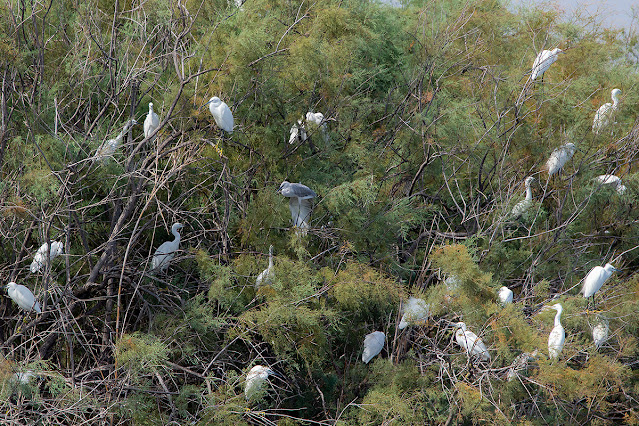 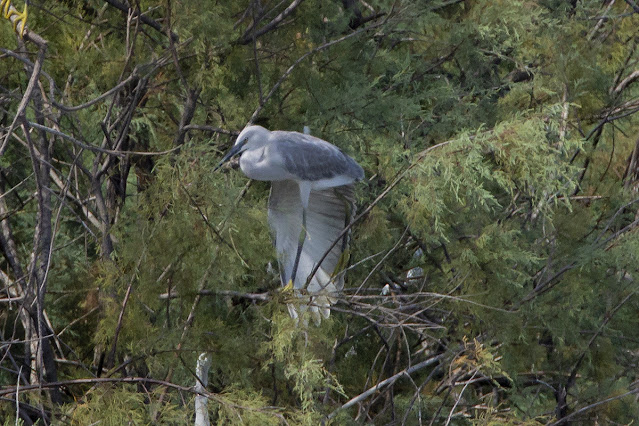 Intermediate Western Reef Herons / Egrets are not easy to ID and it could be a hybrid of little Egret / Western Reef Heron?  And it could all go pear shaped in due course?
The Jury is still in debate over the bird, but just in case you would like to get there and see the bird for yourself
The bird was still there till 3.30 today from the new hide roosting in the the Tamarisk Tree on the left as you look from the hide.

Apologies for no updates for Birding Costa Blanca for the last
3 to 4 weeks.
In my last Blog, I mention I had had a upset stomach.
Unusual for me! to feel so unwell for so long and feel so lethargic.
Now back to full strength. 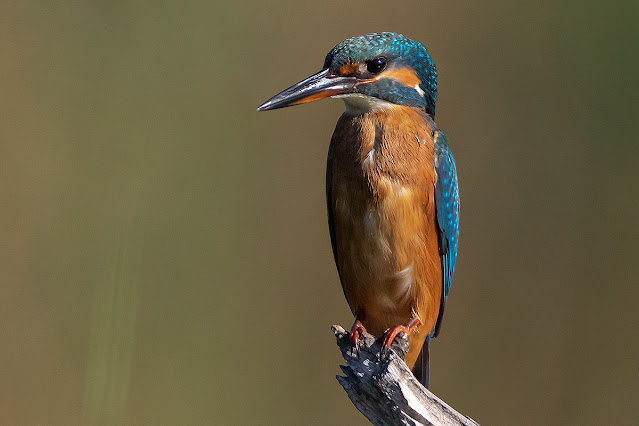 John Edward and i have been visiting the Clot on a regular basis sometime twice a week mostly at first light.  I've got a hunch the Clot is gonna turn up a decent Wader or Crake in due course, hence the repeat visits. 2 weeks a go I am pretty sure there we're 2 Female Garganey which disappeared into the distant reeds and lost, and last week a flypast of possible a Marsh Sandpiper which i didn't get on, till it was to late, and flew into an area which couldn't be observed.  I'm gutted?

Tomorrow we're going inland to Yecla we've not to been able to get there since the end of lockdown, eager to see what around, and what's has changed.

A record time in arriving.  In only just over an hour.  John for years was as a driver for the Formula 1 Black, Maria squad cars and the Armed quick response team has its benefits.
More time Birding.

Yecla roads system has changed dramatically,  loads of redirection and reroutes. But it gets you there fast.

I enjoy Yecla today, it was good to have a change of scenery it was magic and very beautiful.
For me it's all about birds but honestly, this place takes some beating in terms of view's, and vistas,  Breathtaking.
The corn crazy fields have now gone and replaced with a new crop of Maize. And stinky Cabbage Crops. But there are acres of vines and olives groves. 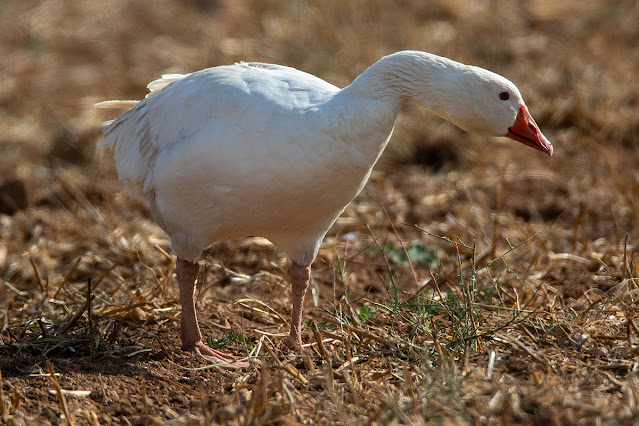 Bird wise it was for me was a disappointment  I have probably set my sights too high.
But there were some highlights.
We found a group of Snow Geese which is now on my list as a
Very rare migrant?  For Spain
Shame they didn't pass the bread test? 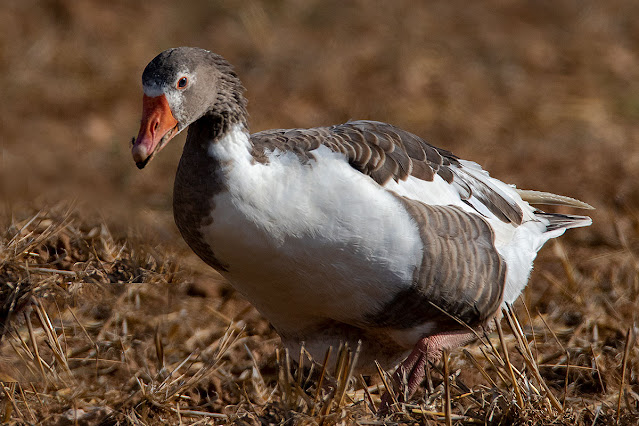 An amazing fresh yellowy/green Willow Warbler showed, which we don't get to see that often,  Northern Wheatear, Blue Rock Thrush, Black Wheatear, Rock Sparrows, Tree Sparrows, Thekla's Lark,
40 Choughs, and Ravens, and a good number of Common Kestrel, I couldn't even string one into a Lesser, and oddly not one Calandra Lark or Short toed Lark

Unusually a lot of Hoopoe's which sat up for a photo or two which I guess are  also on move?
Everything is heading in the same direction of South.
Bee-eaters and all the Hirundines have got the message. Even the European Starlings have arrived? 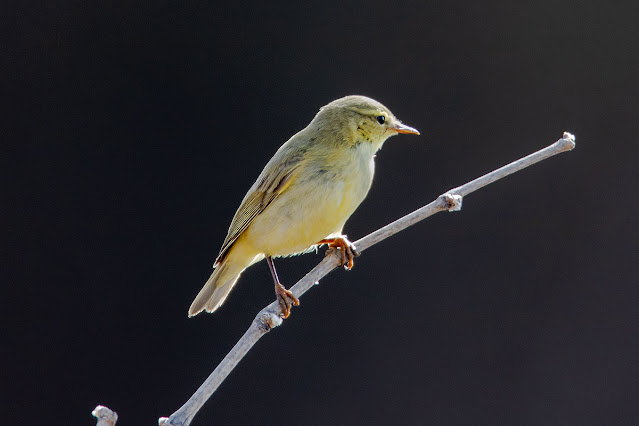 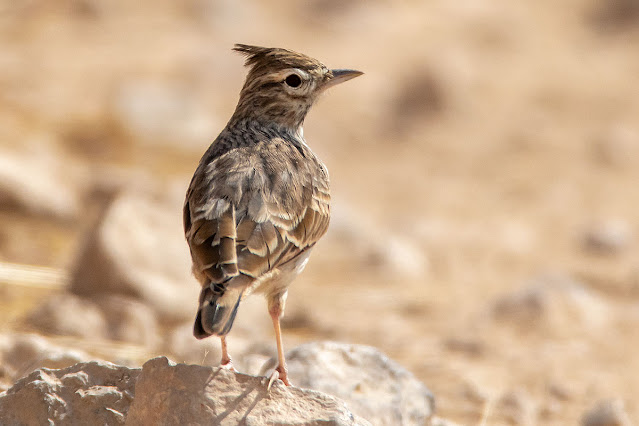 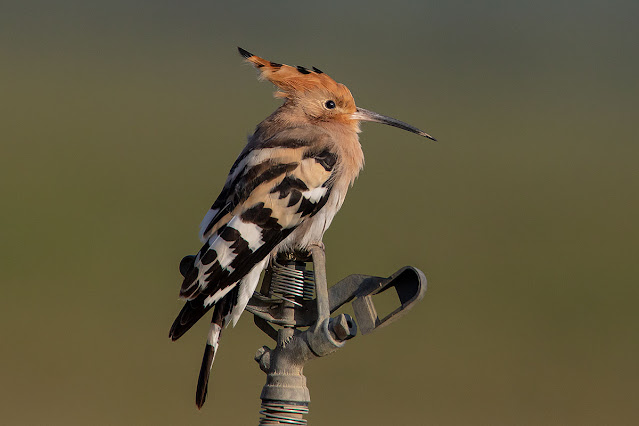 It's Time to say goodbye
To the summer migrants

Not a good idea to go Birding at San Felipe on the last day of August?  The plan was to start at the furthest point and bird back and after the recent rainstorm, we had high hope of finding something different had dropped in?
But we didn't stay long as we were attacked by squadrons of stealth mosquitoes the further from the car park the worse it got.
So we didn't get far?

Took us through the farmed fields, Bee-eaters still present but less in numbers.  Zitting Cisticolas perched up and posed for the camera,  I'd forgotten just how tiny these Wren like birds are? 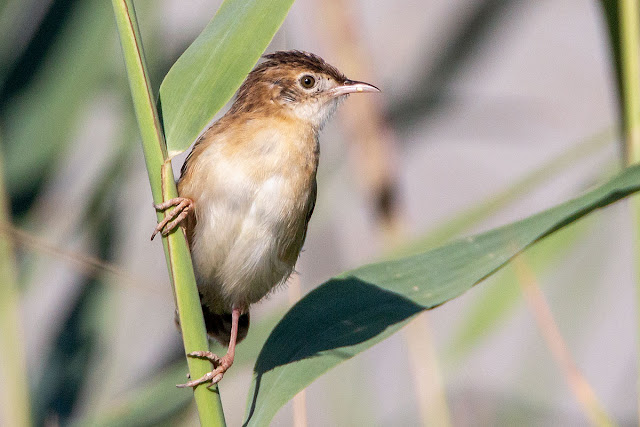 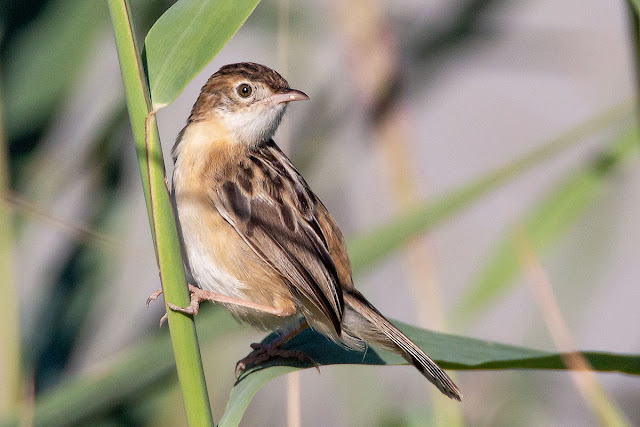 A single Greenshank and a Summer Plumage Dunlin were new arrivals
Little Tern and Sandwich fished the lagoons.
Moment of the day was a juvenile Collared Pratincole which dropped in the Car Park and obliged me a photographic opportunity, 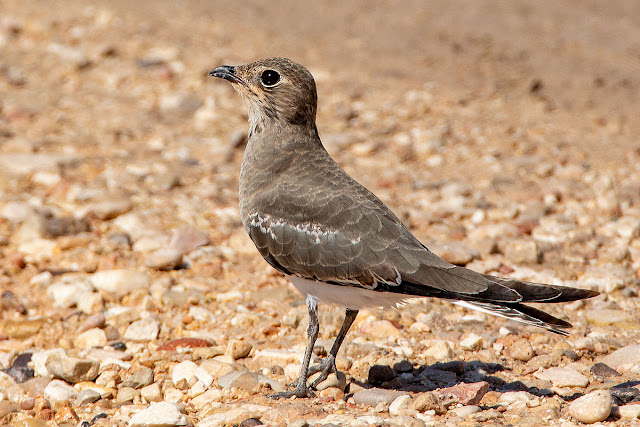 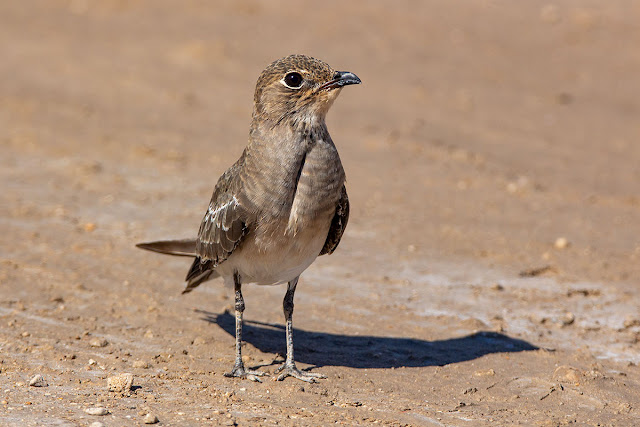 only a few meters away from me and totally unfazed by close proximity of the car.
Unbelievable 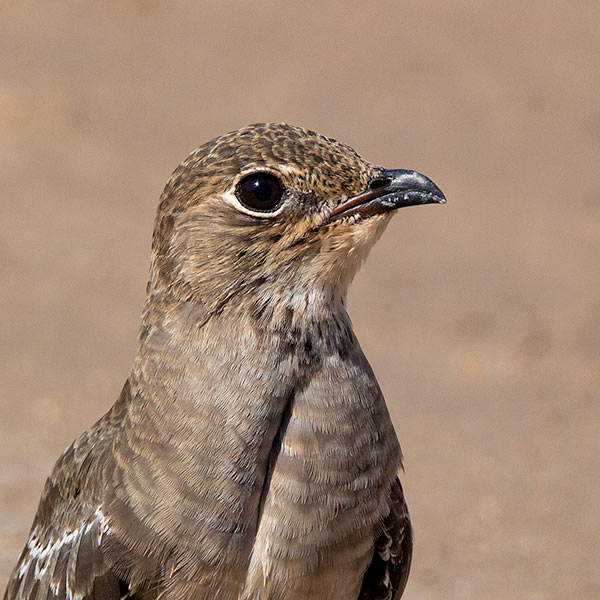 At this moment the Clot seems hard to beat in terms of variety and numbers we'll have another look there, later this week maybe try trip further away next week
Thanks for visiting this Blog.